How Startups Are Born: An Investor’s Guide for the Perplexed (3/3)

The End-Zone: How Startups Do or Die

In Part 2 we learned about different types of shares, dilution, preemptive rights, the ‘power law’, ESOP, debt vs equity considerations and anti-dilution protection. Your company is now mature enough to consider a couple of exit opportunities.

Your company has caught the keen eye of a market incumbent that is interested in acquiring your technology. The board is excited about the M&A, and you and Fran, young entrepreneurs, will finally see liquidity. The net price tag is $20M (after deducting fees for your banker, lawyers, accountants and ambulance chasers).

[Note: We're deliberately using a low exit value to display how the preferences work. If the company sold for, say, $200M, all shareholders will convert to common shares, waive their preferences and just take their pro-rata piece of the pie.]

You and Fran look at the cap table. Firstly, the unallocated ESOP can be ignored and retired. This was that component of the ESOP that was earmarked for future talent, or to retain key staff, but was never actually issued. These shares (some 553 thousand) are ignored.

Liquidation Preferences enable investors to receive a multiple of their original investment amount back first, before any distribution of proceeds flow to other share classes. If senior share classes have a liquidation preference above 1x their investment, they will actually make a profit before any other investor will even receive a penny. For a senior share- class investor, this means that the total value of a company’s proceeds at exit only has to be as much as their overall investment amount in order to break-even on the deal, whereas if this were tied strictly to ownership percentages it would take a much bigger outcome to break even on the investment.

There are two types of preferred liquidation preferences: Non-Participating (most common, our scenario example) and Participating (not very common, ‘double-dipping’ on the part of the investor). Participating Preferred can be further sub-categorized as fully participating or capped, explained below.

The investor will only receive an amount equal to the greater of his/her pro-rata ownership of the company or the preference stipulated in the investment. In our case, as the Preferred B/B-1 shareholders hold 36% of the company (1,129,242/3,134,626 shares), an exit at $20M should result in a $7.2M return for the investor class. However, as the 2x preference will yield a higher return of $10.1M ($5.05M investment (including the CLA but excluding the accrued interest) x2 – assuming that this was the term of the CLA conversion shares), the Preferred B class should automatically receive their preference amount of $10.1M. This is the totality of their return, and the B shares are no longer considered in any distribution calculations.

Oftentimes, there is an added layer of complexity, as shareholders invest in multiple rounds (i.e., different share classes), and their overall interests needs to be computed. However, typically, to approve an exit, the company will require the majority vote of each share class. In our example, due to their high ownership stake in the company resulting from investments in previous rounds with lower valuations, both Mike and Ever Line Ventures will prefer to forego their preference, convert to common, and take their participation amount. However, as Dire Straits Capital hold the majority of the Pref B class (58%), they can force the entire class to convert. 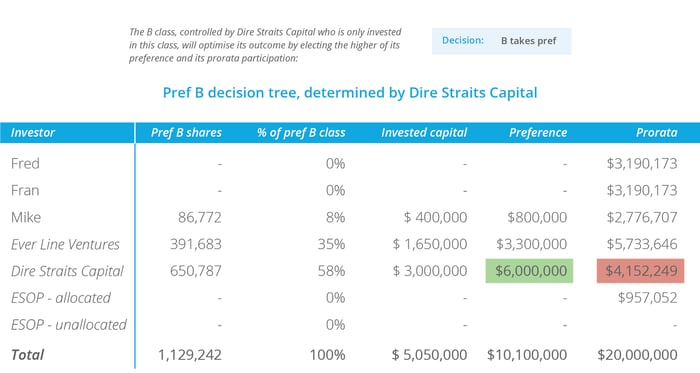 The remaining ~$9.9M will next be distributed to the Preferred A shareholders, in accordance with their 1.5x liquidation preference. As the Preferred A shareholders hold 30% of the residual company (605,384 / 2,005,384 shares), proceeds of $9.9M should result in a $2.98M return for the investor class. However, as a 1.5x preference will yield a higher return of $4.5M ($3M investment x1.5), the Preferred A class should automatically receive their preference amount of $4.5M. This is the totality of their return, and they too, will no longer be considered in any distribution calculations.

The total return to investors and shareholders is as follows: 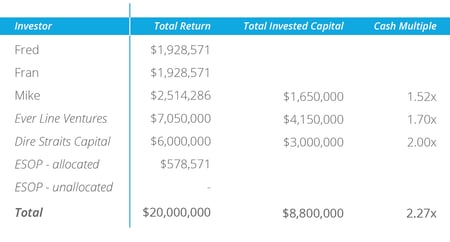 Employees in the company may be disenfranchised by the relatively small amount allocated to them. But it’s important to remember that an acquiring company will usually issue additional restricted stock units/ESOP to key employees who stay on with the company.

While this concept isn’t relevant to our current example, it’s important to understand anyway. This structure exists to both limit the downside and enhance the upside on an investment. On the upside, a participating preferred structure allows an investor to initially receive his/her preference and then to further receive his/her pro-rata of the company. Hence the ‘double dip’ comment above. Obviously, this is not great for common shareholders.

As previously mentioned, there are two types of participating preferred structures:

However, holders of this preferred share class have the option to convert their preferred shares to common shares ahead of the close of the transaction if they decide that they are better off converting to common shares. In other words, if they would receive a greater than 3x return multiple on their invested capital if they convert to common shares and give up their participating preferred rights. This is important to note as some people mistakenly believe that the cap feature is a fixed cap for the total return a preferred shareholder can receive no matter what the overall outcome. This is not the case, and these holders are not limited to the cap if their ownership percentage of a company would result in a return that is greater than the capped amount.

The purpose of the cap is to set a return threshold above which the additional proceeds received from the participating feature disappear. The reasoning behind this is that if the overall return to an investor is above some multiple of invested capital they should no longer receive proceeds that exceed their actual percentage ownership in the business. I.e., in order to avoid excessive double dipping.

The Zone of Indifference

There are multiple factors, maybe for another post, but two of which I want to specifically mention:

Too many entrepreneurs place their focus on the cap table at face value without running through the financing terms and impact on the waterfall, in the hope that their company will successfully IPO, all preferred shares will convert to common, and all liquidation preferences will disappear.

Realistically, this is not the case. Usually, in the event of a successful exit, liquidation preferences will matter.

I recently met with a young company where the founders were at a junction and had to decide whether to take additional VC investment (which will come with the usual dilution and liquidation preferences) at a significantly higher valuation, or to sell out immediately at a much lower valuation. When the founders ran through the waterfall it became apparent that to equate their personal exit pieces between the two scenarios, they would have had to sell the company at an almost unrealistic price down the road if they did decide to take the additional financing. The result isn’t important here, but going through the exercise was very meaningful.

So what’s the take home from all of this?

If you have any questions or comments, feel free to leave a comment or be in touch.

Most of us tend to associate the term “investments” with public equity. Many tend to consider a typical investment portf...