It seems a waste to talk about startup investing without sharing some of the most awe-inspiring successes. We could start with Accel, the VC that invested $12.7M in Facebook’s series A to buy 11% – back in 2005 – in a deal that was widely ridiculed for the valuation that Accel was willing to pay. Of course, Accel had the last laugh. In 2012, at IPO, Facebook’s market cap was over $100B, meaning that Accel eventually realized a return of 800 times its principal investment.

Or else we could have a look at Bessemer Venture Partners’ $6M series A for Intucell in 2011, which purchased them nearly half of the Israeli startup. Two years later – with no additional funding – Intucell was acquired by Cisco for nearly $500M. Bessemer’s stake of about 50% returned over 25-30 times their principal investment.

It goes without saying that these are the sorts of stories you generally don’t find outside of the VC space, in other asset classes – and it’s the magnetic pull that draws investors to startups. At the same time, the reality is that most people (or institutions) that invested in these unicorns also invested in a broad portfolio of other businesses, which may or may not have been successful.

So how does the perceptive investor ensure that, among all the misses, there is also that hit (or hits)?

Covering Your Bases: ABCs of Diversification

Taking a step back from the specific issues of venture capital, let’s take a second to look more generally at some basic tenets of investment strategy. There’s not a guide to investment out there that does not quote the tired saying,

“Don’t put all your eggs in one basket.”

Diversification is a cornerstone of any smart investors’ approach to asset management: ensuring a portfolio covers multiple investments in different asset classes – including stocks, bonds, and cash, and perhaps real estate or commodities – and that the investments are not correlated. In a perfect world, investors look to identify assets with returns that move in opposite directions. The assumption is that by spreading the exposure around, you can limit the risk.

The golden rule of diversification is that by spreading out your investment portfolio, you can maximize long-term gain. It’s necessary both in terms of the returns, and to ensure the peace of mind that comes with knowing you have done what you can to avoid excessive damage to your assets.

Moving back to the world of startups, the concept of diversification is somewhat more complex. With startups, the magnitude of risk is greater and therefore, how you approach the space has a massive impact on your potential profits.

As we’ve mentioned, conventional wisdom states that startups could represent around 5% of your total portfolio.

On top of that, investment in startups should be spread across many ventures – where the word “many” means, at the very minimum, at least ten, but with most top firms placing between 20 and 75 companies or more, within each fund.

And, as so aptly described in this Forbes article, venture capital tends to yield binary results. This means that, generally, you can either hit the jackpot – or lose everything. By diversifying a portfolio and investing in multiple companies, you mitigate this risk.

This TechCrunch perspective puts it in terms of simple mathematics: Unicorns happen 1-2% of the time, so it is logical to adopt a portfolio size that includes at least 100 companies. A larger portfolio size increases your chances of investing in a startup that succeeds; and what makes the whole system work is the fact that the 1-2% that achieve unicorn status return as much as 50x or more of investment.

Here’s where Babe Ruth comes in. As explained by Chris Dixon, general partner at Andreessen Horowitz, in this post about the Babe Ruth Effect: even though Babe Ruth struck out a lot, he was one of baseball’s greatest hitters. Why?

His incredible record of home runs.

Home runs are a big deal in baseball because, with one swing of the bat, multiple runs can be scored. As a result, the high number of times that Babe Ruth struck out was offset by the magnitude of his wins.

Startups are uniquely volatile, and investors must expect to have plenty of misses. Successful investing in this space means ensuring that you also get the home runs.

Of course, the greatest investors and funds not only have more home runs, they also have wins of greater magnitude.

Beyond “One-to-Many”: A Broader Look at Diversification

As we’ve pointed out, diversification of an investment within the startup space is not only a question of investing in a greater number of ventures. Diversification involves covering your bases in three directions: sector, time, and geography.

A well-diversified portfolio holds investments across a number of different industries and sectors, because each one is likely to move in its own way. Furthermore, because all business is affected by the macro economy, by investing in companies over a longer period you can mitigate damage that can be caused by large-scale problems such as changes in the funding climate or a national recession, which increase risk.

Lastly, a portfolio that is spread out over several countries or regions has the potential to tap into different opportunities. In addition, being in different geographical locations mitigates the risk that, for example, a change in government or regulation can hurt your investments.

Spreading Yourself Out — But Oh, So Very Carefully

But this is just a part of the picture. While we’ve established that startup investing should be a slice of a portfolio that includes other asset classes, and that within the space investment should be diversified over multiple ventures in different sectors, times, and geographies, there’s one more glaring part of this process: the question of due diligence.

The high level of startup failure means that you need to be highly selective in choosing which ventures you invest in.

The bulk of returns comes from a very small percentage of the total number of companies. According to the Kauffman Foundation’s Angel Investor Performance Project, 52% of early startup investments fail to return 1x; somewhat similar numbers are reported by the well-established fund Horsley Bridge, which says that 62% of its funds’ early venture investments provide a return of less than 1x.

These numbers reflect a key stat in the startup space: the top 10% of companies hold a disproportionate share of the total returns for the portfolio, which means that – in this space – doing a high amount of diligence is crucial.

Simply put, diversifying across randomly selected startups will not help a portfolio. As a result, it is more important than ever that investments are diversified across only “top” startups – and identifying each of these is incredibly hard, time-intensive work. And this needs to be multiplied, if you are following best practice, by anywhere from 10 to 75 startups or more.

To quote Hamlet: “Ay, there’s the rub.” Or to describe the conundrum succinctly: Part of what makes startup investing such a challenge is that it involves maintaining the required high-level of due diligence, which is very time intensive, for a well-diversified, carefully selected portfolio – in which, if you’re following best practice, there are dozens of ventures. Putting it mildly, it’s a herculean task.

Driven by its experienced team of former venture capitalists and institutional investment professionals, since 2013 OurCrowd has been participating in rounds alongside global, tier-1 investors like Andreessen Horowitz, Bessemer Venture Partners, and Sequoia, allowing our investor community access to invest at the same terms as major VCs.

Based in Israel with activities globally, OurCrowd has evolved to become Israel’s most active investor (as of Q3 2018). The company’s investment team has vetted more than 8,500 companies to date and has a stellar track record that includes dozens of exits so far, with many being acquired by  multinational companies like Uber, Nike, Canon, Intel, Snap, Oracle, and others, as well as going public on global exchanges – including the first-ever IPO via equity crowdfunding in history.

With OurCrowd, thousands of accredited investors around the world suddenly have access to VC-level deal flow and investment due diligence on one startup investing platform. Not only that – but they also have options for how they want to build their portfolios.

A 2016 poll of 73 limited partners by Los Angeles venture firm UpFront found 26% of investors were looking to grow their commitments to venture capital (see details of the poll here.)

Investors searching for out-sized returns, and who can absorb venture capital’s uniquely long average holding period of over ten years, are attracted to venture.

At the same time, angel investors face among the highest levels of risk of losing most or all of their principle on a per-deal basis compared to almost any other asset class. Because the payouts sought from a small number of successes are intended to cover the average per-deal loss, diversification across a broad group of investments is an absolute must for angel investors.

Do Due Diligence and Do It Right 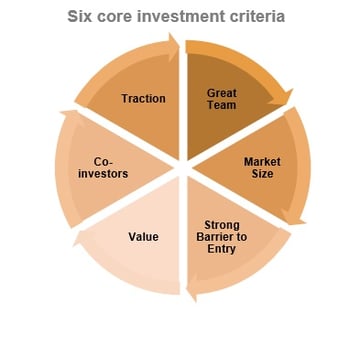 One of the advantages of OurCrowd is that every potential startup investment (and venture fund) is screened by a professional team, and ongoing, in-depth due diligence is handled by seasoned and successful VC professionals.

The process involves checking key factors determining a company’s probability of success, including gaining an understanding the quality of the team, market size, barriers to entry, value, co-investors, and traction.

OurCrowd evaluates business plans and feasibility, as well as technology differentiation, the competitive landscape, industry trends, and forecasts. The team dives deep into a venture’s financial performance and looks at projections, customers, and partner relationships.

In a Nutshell: Invest in Top Startups Across Multiple Sectors

OurCrowd’s sourcing apparatus is bolstered by the fact that the team has co-investment relationships with major VCs (like Accel and Battery Ventures), angels (like Marc Benioff of Salesforce and Gigi Levy of 888 and Amdocs), and multinational strategic investors (like Bosch and Deutsche Telekom).

And investors also benefit from visibility into the existing OurCrowd portfolio, which features numerous startups that have become breakout leaders in their respective sectors – including companies like JUMP Bikes (acquired by Uber), BriefCam (acquired by Canon), ReWalk (NSDQ: RWLK), Replay Technologies (acquired by Intel), and Crosswise (acquired by Oracle). OurCrowd investors have exposure to a roster of the follow-on rounds that the company doubles down on.

Most of us tend to associate the term “investments” with public equity. Many tend to consider a typical investment portf...